Mia’s Battle with Pars Planitis and Retinal Vasculitis
Our story began not even 1 year ago. On December 23rd, my 12-year-old daughter, Mia, told me the vision in her right eye was blurry. Even though Mia had gotten a new prescription in August, I assumed she needed a new pair of glasses because our family has a history of frequent prescription 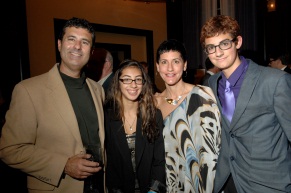 changes. Four days later Mia said, “my peripheral vision is fine, it’s just my central vision that is blurry”. That struck me as unusual so I began to think she had a detached retina.

The next morning I phoned our ophthalmologist’s office and obtained an appointment with a physician we had never met. He informed us that she had vitritis and some kind of lesion on her retina. He insisted she be seen the next day by the retinal specialist to make sure her retina was intact. He then informed us that the type of inflammation she had was often associated with a myriad of other autoimmune diseases. Because of this, he sent us to our pediatrician with a list of blood work that needed to be done that day. He was obviously concerned and wanted a jumpstart on a diagnosis, if there was one.

I went home that evening and began researching “vitritis”. Thanks to the power of the Internet, one page led to another and the term Uveitis was first introduced to me. As I started learning more about Uveitis, I discovered that most of the research led to Dr. Stephen Foster. I printed his website and carried it into our appointment with the retinal specialist the next day. The retinal specialist was a physician who only visited our practice once a week. When we arrived, we were informed that he had been overbooked and was already running behind schedule. It was unlikely we would be able to see him and we were advised to return the following Wednesday. We were prescribed pred forte drops for the week and were expected to comply with this suggestion. I come from a long line of people that don’t easily take no for an answer. I told them we wouldn’t leave the office until the specialist took 5 minutes to look at Mia’s eyes. The staff could see that I was serious, so they convinced the retinal specialist to see us and begrudgingly, he came in. He performed a thorough examination and was concerned by what he saw. He felt that yet another specialist should see Mia.

Armed with the information I printed from the MERSI and OIUF websites, I asked if Dr. Foster would be the right physician to see Mia. Both the retinal specialist and the original ophthalmologist we saw said they knew of Dr. Foster and were quick to recommend him. I walked out of that office on December 29th, phoned MERSI, and spoke with the new patient coordinator. She explained to me that Dr. Foster was not in the office that day, however, she felt it was important that Mia be seen immediately. She was able to get Mia an appointment that afternoon with one of Dr. Foster’s associates, so we drove up to Cambridge.

We spent several hours at MERSI that day, marking the beginning of our journey. Mia has been diagnosed with Pars Planitis and Retinal Vasculitis and started treatment immediately. Since that day she has taken Prednisone, been injected with Methotrexate and infused with Remicade. She is presently on Cyclosporine and CellCept, which must be taken on an empty stomach, one hour before or two hours after eating. This is not an easy regimen for a now 13-year-old with a veracious appetite.

For now, it is believed that her Uveitis is idiopathic but she has recently seen physicians who specialize in vasculitis and rheumatology in order to seek out the causes of new symptoms. The key to this journey is the fact that our ophthalmologist was educated about the need for specialty care. He was aware of the important research being done at the Ocular Immunology and Uveitis Foundation. Mia is an early intervention dream! I have read so many horror stories about people who are treated for years with no results and by the time they finally get to Dr. Foster, damage has already been done. We found him immediately. Our scary story is only that we are journeying on a path we never thought we would be on…thus our need to walk…and that’s how “Mia’s Army” began. We wanted to participate in OIUF’s “Walk for Vision” to give back to the organization that welcomed us warmly on a cold winter day in December. Friends and family members enlisted in Mia’s Army and joined us for the “Walk for Vision”. The support of our family, friends and the people we have met through MERSI and OIUF have gotten Mia past this scary road. Mia has complete trust in Dr. Foster. His demeanor and attentiveness bring comfort to her.

Mia recently told a friend that in the beginning Uveitis was like a mean bully pushing her around. Due to her support system, she has learned to make it a friend, a challenging one, but a friend nonetheless.

I urge others to involve themselves by supporting the groups and fundraisers that sustain the Ocular Immunology and Uveitis Foundation. It takes people like you and I to raise awareness and the necessary funds that are greatly needed to keep the Foundation’s mission on track. Awareness of this orphan disease, coupled with Dr. Fosters’ persistence and insistence on achieving remission for his patients, is what will make Mia’s journey a happy one.